I love junk food.  I should probably be a bit more politically correct and call it “comfort food.”  Some of my personal favorites: Cheetoes, Reeses Peanut Butter Cups, Milky Way Bars, or a bowl of cereal (preferably the kid stuff).  But, if I need something bad to eat, I’ll eat just about any kind of junk food.  Here’s some interesting, some historical, information on some of America’s favorite comfort foods.  A big thanks to Joe Wilkes at Beachbody for this article. 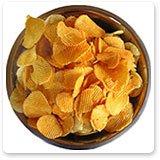 In what country were potato chips invented? In the good old U.S.A. They were invented in 1853 by chef George Crum, who became annoyed by a customer who complained his fried potatoes were sliced too thickly. The chips quickly became a hit and were put on the menu of Crum’s restaurant, the Moon Lake Lodge in Saratoga Springs, NY, as “Saratoga chips.” Another great step in potato chip technology was when food entrepreneur Laura Scudder invented an airtight wax-paper bag in 1934, ensuring that the potato chips would stay fresh until the bag was opened.

What was the first recipe to be printed on a package of American food? Macaroni and cheese. According to food writer Jeffrey Steingarten, a Pennsylvania pasta maker printed a recipe for the gooey treat on a package of macaroni back in 1802. Rumor has it that the dish of macaroni and cheese may have been invented by Thomas Jefferson, but that has never been confirmed.

What is the official cookie of Massachusetts? The chocolate chip cookie, or the Toll House® cookie, was invented by Ruth Wakefield, the owner of the Toll House Inn in 1933. The legend is that some pieces of Baker’s chocolate fell into a mixer full of sugar cookie batter. During World War II, soldiers from Massachusetts began asking for Toll House cookies in care packages, sparking a national craze for the cookie. Today, an estimated seven billion chocolate chip cookies are consumed annually.

What comfort food was believed by the Jewish sage Maimonides to aid sufferers of hemorrhoids or leprosy? The king of the comfort foods, chicken soup! It has been prescribed as a home remedy for the common cold since ancient Egypt, and while scientists have debunked some of its putative curative powers, it has been shown that chicken soup may indeed have an anti-inflammatory effect, which may bring relief to those suffering from a variety of illnesses. In Wisconsin, a type of chicken soup with vegetables and cream is even nicknamed “Belgian penicillin.”

5 Things to Cut Out of Your Diet