Ah, the islands. Their mere mention floods the mind with happy thoughts of sun-drenched beaches, dancing to reggae late into the night, and eating healthy, exotic fruits.

Well, OK, so maybe that last fruit thing doesn’t spring immediately to mind, but it should. For most, tropical fruits only come into play after they’re run through a blender and doused in rum, but the truth is these colorful balls of island goodness are delicious without adding alcohol. What’s more, they can actually be good for you.

I know, I know. When you’re kickin’ it barefoot on the white sand a couple of latitudes south of where you are now, proper nutrition just doesn’t seem all that important. But, hey, if you can eat healthy and delish at the same time, why not go for it, mon?

1. Mangos. Mangos are the national fruit of India, but you’ll now find them growing just about anywhere tropical. Various varieties come into season anywhere between January and September. Ripe mangos are usually yellow and red, but the best way to tell if a mango is ready to eat is to give it a light squeeze and a good snort. If the flesh gives a little and the stem smells sweet, it’s probably ready to go.

One cup of mango is 107 calories, mostly carbs, with 3 grams of prebiotic fiber. Mangos are loaded with phytochemicals, as well as all kinds of micronutrients. That aforementioned cup contains 76 percent of the recommended daily allowance (RDA)* for vitamin C, and 25 percent of the RDA for vitamin A. You also get some vitamin B6, vitamin E, vitamin K, thiamin, riboflavin, niacin, and folate. Plus, you’ll find 9 percent of the RDA for copper and 7 percent for potassium, as well as some magnesium, calcium, phosphorus, and manganese.

Mangos also contain lycopene—an essential phytochemical that most people get through tomatoes, which is believed to ward off cancer.

There are muchos ways to prepare mangos, but the easiest—and most fun—is to slice it lengthwise as close to the large, flat pit as you can, separate both halves from the pit and each other, cross-hatch the juicy flesh with a knife, and push up on the inedible outer skin from underneath so the cubes you’ve made fan out for easy pickin’.

2. Passion Fruit. These tangy little South American fruits come in both purple and yellow. They’re similar to the pomegranate in that you simply cut them open and eat the insides, seeds and all.

A University of Florida study showed that the phytochemicals in passion fruit juice, specifically carotenoids and polyphenols, proved beneficial in fighting cancer.

Because you eat the seeds, downing a passion fruit offers a nice hunk o’ fiber, yet hardly any calories. One fruit, which is approximately 18 grams, contains 17 calories and 2 grams of fiber. To give you a little perspective on that, half a cup of passion fruit is about 115 calories and earns you 13 grams of fiber. But the 17 tiny calories from a single fruit will also earn you a nice little hit of vitamins C, A, and B6, as well as niacin, riboflavin, folate, iron, potassium, magnesium, phosphorus, and copper.

3. Pineapples. Admittedly, the “exotic” factor drops a little with pineapple, but they are tropical, and honestly, when was the last time you bought a whole pineapple and not just the lame canned rings?

When shopping for a good pineapple, look for one that’s mostly brown and yellow. Green means it’s not ripe. If you smell the bottom of the fruit and the odor makes you want to sing The Piña Colada Song by Rupert Holmes, it’s probably a winner.

To cut up a pineapple, twist off the leafy top and chop off the top and bottom of the fruit. Place the fruit on its now-flat bottom so it’s stable and carefully cut off the outer skin in long, vertical strips. When that’s done, quarter the pineapple lengthwise down the core, then slice out the core from all four quarters. The core makes for tough, chewy eating, so discard it unless you’re going to use it in a smoothie—which is an excellent idea; the core of the fruit also contains a substance called bromelain that studies suggest has anti-inflammatory properties.

4. Guavas. No wonder Hawaiian people surf so well. They’re fueled by these delicious little superfruits! The more than one hundred varieties of guava come in all sorts of colors, from yellow to orange to red, but the most common one, the apple guava, has a green outer skin that tends toward yellow when ripe, with a pink-to-white center.

You can eat a ripe guava whole—except the stem. Chowing down on all those seeds and that skin makes every fruit a fiber party. One tiny fruit—just 37 calories—contains 3 grams of fiber. Eat three guavas, about the calories you’d get from one apple, and you’re talking 9 grams of fiber, 4 grams of protein, and a measly 24 grams of carbs.

One little guava will also earn you 209 percent of the RDA for vitamin C. Move over, oranges, there’s a new ascorbic acid source in town. You’ll also get some vitamin A, vitamin E, thiamin, niacin, vitamin B6, folate, magnesium, phosphorus, potassium, copper, and manganese. 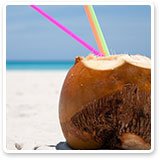 5. Coconuts. Rarely do the words “tropical fruit” and “controversial” come to mind at the same time, unless you’re talking about coconuts. There are two edible parts to this fruit (which isn’t actually a nut, but rather a drupe, in the same family as the apricot and mango). You have the water and the meat. There’s no contesting the health benefits of the water. The meat, which is mostly saturated fat, is another matter.

First, the water—the wet stuff in the middle when you break it open. One cup has 46 calories, mostly carbohydrates, and while it contains some vitamin C, thiamin, riboflavin, and vitamin B6, the real magic of coconut water is the magnesium, phosphorus, potassium, sodium, calcium, manganese, and iron. All these electrolytes make coconut water an ideal sports drink. To compare, one medium-sized banana has 422 milligrams of potassium. Your cup o’ coconut water has 600 milligrams at half the calories—and no annoying peel to slip on afterwards.

The meat is another story. One cup of shredded coconut—about one-fifth of one fruit—is 283 calories, 216 of which are saturated fat. There’s a fairly heated debate going on in the nutrition community right now about saturated fats that’s far too complex to address in this article, but if you’ve done your homework and decided sat fat is where it’s at, this is a pretty good way to get it. Your fatty cup o’ nut meat also contains 7 grams of fiber and all the aforementioned vitamins and minerals.

Cracking a coconut is probably the most labor-intensive and satisfyingly destructive time you’ll ever have opening a fruit. As long as nuance doesn’t matter to you, the best way is to get a hammer and a nail. Drive the nail through each of the three little black indentations at the top of the coconut. Turn it over and drain the water into a cup. When that’s done, wrap it in a towel and give it a few good whacks with the hammer. Peel the meat out of the fractured bits of shell.

An alternate way of opening a coconut is to let someone else do it for you. You’ll find the water and the meat at many healthy food stores, as well as upscale markets like Whole Foods Market®. There are several brands of coconut water available in handy little tetra packs—but frankly, you’d probably intimidate the crud out of the other team next time you played basketball if you busted out a coconut, hammer, and nail at halftime.

6. Papayas. People often confuse papayas with pawpaws but, frankly, they aren’t that different. Papayas are smaller with orange flesh. Pawpaws are larger with yellow flesh. You prepare them the same way and they’re nutritionally similar, so if you can’t get one, buy the other.

One of the unique draws of this fruit is its digestive properties. It contains the protein-digesting enzymes papain and chymopapain, which can also help with inflammation. Papayas, like mangos, also contain lycopene.

A medium-sized papaya is about 119 calories, mostly carbs, with 5 grams of fiber. It’s another vitamin C tour de force, with 313 percent of the RDA. It also contains vitamins A and E, as well as thiamin, riboflavin, niacin, and pantothenic acid. It’s yet another great source of electrolytes, with calcium, iron, magnesium, lots of potassium, and selenium.

The easiest way to serve a papaya is like a melon. Pick one with red-orange skin that has a little give when you squeeze it lightly. Slice it open, scoop out the seeds, and you’re good to go. If you want to get fancy and impress the in-laws, a squeeze of lime really brings out the flavor.

You see? Getting tropical—and healthy—is easy. So instead of trying to capture the spirit of the islands by roasting a pig on your front lawn, pop down to your local grocer and see what exotic delectables await. Just make sure you leave your grass skirt at home.

P90X Peak Recovery Formula, Do You Need It?

Artificial Sweeteners: How Harmful Are They?