8 Tips to Survive the Football Season

Are you ready for some football? Sure ya are! As the new season kicks off, we’re all rooting for our favorite team to make it to the Super Bowl, or the Rose Bowl, or the Whatever Bowl. But in truth, my fellow Americans, the celebration isn’t all about the sport. It’s about the pigskin, but it’s also about the potato skins. It’s about the Heisman, but it’s also about the Heineken®. In other words, it’s about tailgating. Is there anything more glorious than perching on the bumper of your Explorer, hot dog in one hand, cold beer in the other, telling everyone in earshot about the trail of destruction your team is about to make across the Pac 10? Well, that’s great and all, but where your fitness goals are concerned, tailgating leaves a little to be desired. So how do we capture all the fun of tailgating without destroying all the progress we’ve made during our hours of sweat? Let’s do some preparation for the game ahead.

1. Work out first. A brand-new study by a team of Brazilian researchers (Public Library of Science, August 2010) concluded that exercise actually modulates feelings of fullness in the brain, causing us to reduce our intake of food. In other words, when you work out, you actually eat less. Which is good, because you don’t want to spend an hour and a half working out in the morning and then destroy it all with cravings for fried food and alcohol. Now that you’re doing P90X® 6 days a week, you’re a more efficient machine, and you’ll have fewer cravings. So before you hang out in that jersey that hides your six-pack, make sure your six-pack is intact and get a good workout in before the party. Working out will help reduce your cravings and decrease your appetite. (Besides, it’s pretty unlikely you’ll feel like working out after the game.)

2. Don’t go hungry. Popular wisdom says you should never go grocery shopping while hungry. The same rings true for attending any kind of party. The worst thing you can do to your nutrition plan is wait until you’re starving, then descend upon an endless supply of low-quality carbs and not-so-lean meats. It’ll be 45 minutes before you realize you’re no longer hungry, and you’ve just consumed your weight in cheese curls. Eat a clean, high-quality meal before you arrive at the gathering. You’ll eat less garbage and you’ll probably be a lot more pleasant to be around as well. 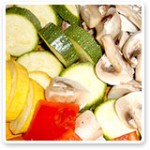 3. Veggie it up. I know, I know, you don’t want to be that guy, but if you’re going to bring anything to the party, your first choice should be a veggie platter. Not only can you save yourself from tomorrow’s food hangover, you might actually do your body some good. Bite-sized pieces of broccoli, carrots, celery, bell peppers, cauliflower, and snap peas are all inexpensive, low in calories, and full of vitamins. Create a low-fat dip to accompany them, and you might just trump the team’s QB as MVP. Just use any onion or ranch dip recipe, with nonfat yogurt, nonfat sour cream, or nonfat cream cheese as the base.
Also, try the 5-to-1 veggie trick: for every five bites of veggies you consume, you’re allowed one full-fat snack bite. You’ll end up having to chew so much for that one morsel of evil, it won’t really be worth it.

4. Feeling fruity. Another great thing to bring tailgating is a fruit platter or fruit salad. Yes, I realize fruit has a lot more sugar in it than veggies do. But fruit is a lot lower in calories than potato salad, it’s loaded with vitamins, minerals, and antioxidants, and most people like it a lot. What’s more, it’s high in fiber, so you’ll stay fuller longer. Fruit skewers are a big crowd-pleaser, and counting the empty sticks will show you how much you’re actually eating. Aim for watermelon, cantaloupe, grapes, strawberries, apples, oranges, peaches, and nectarines.

5. Pass (on) the suds. This is the section everyone’s going to want to skip, but reading on will only work to your advantage. Most of us enjoy an adult beverage now and again. There’s nothing more refreshing than a cold beer when you’re sitting in the hot sun. But, people, they call it a “beer gut” for a reason. The empty calories in beer have accounted for more spare tires than the Michelin® Man. But since many people can’t or won’t abstain, try switching to light beer. Sure, some taste like flavored water, but there are a few low-calorie versions out there that are actually pretty good, especially if you squeeze a little (or a lot) of lime into them. Or try a cocktail made with a low-calorie mixer, or one that mixes a splash of fruit juice with soda water and either an ounce of your favorite liquor or a few ounces of white wine.

One cup of light limeade, 1 ounce of tequila, and 1 ounce of orange liqueur blended with ice is roughly 100 calories—and really tasty. Crystal Light® and vodka make for some pretty yummy low-cal drinks, and will still be under a hundred calories. And remember that both white wine and champagne come in at about 100 calories a glass. Remember, a couple of drinks in an afternoon is fine, but if you’re putting so much away that the dude in the body paint starts to look, well . . . sexy, it’s time to cut yourself off.

6. Get your hand out of the bag. When you’re running late on game day, the path of least resistance is to run into a 7-Eleven® and grab a few bags of chips and maybe some dip. Everyone loves ’em, right? Well, your waistline doesn’t. You can easily consume a couple of meals’ worth of calories by shoving your hand into a bag a few times. So plan ahead a tiny bit and replace those greasy potato chips, corn chips, and cheese curls with baked tortilla chips and salsa, seasoned air-popped popcorn, multigrain pretzels, and mini rice cakes. You’ll still get a ton of crunch and flavor, without consuming 13 grams of fat per handful.

If you want to add a dip, try this low-fat/high-protein guacamole recipe: Take a 16-ounce container of plain nonfat Greek yogurt, 1 peeled, pitted, and coarsely chopped large avocado, 4 tablespoons of chopped fresh cilantro, 2 teaspoons of minced jalapeño, and 1 small minced clove of garlic. Throw them into a food processor and blend until smooth. Chill before serving. 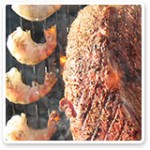 7. Main course, to stay on course. Most experienced tailgaters include a barbecue in the festivities. You can smell charcoal and propane for miles around any stadium on any given Sunday. And with the right food choices, a barbecue is a healthy way to prepare good sources of lean protein. Unfortunately, it’s a lot easier to throw hot dogs on the grill. Look, if you wanted easy, you would have called for liposuction and never started INSANITY® in the first place. So forget the path of least resistance (and all those hot dog nitrates) and try a main course that’ll keep you on course.

Replace a beef or pork hot dog with a turkey or tofu dog, a 20-percent fat beef burger with a 99-percent lean beef one (or a chicken, turkey, or veggie burger), or a fatty pork sausage with the low-fat chicken variety. Place any of these on a multigrain roll, or stuff them in a pita pocket. Try a low-fat grilled chicken breast instead of those messy, fatty ribs. Skewer up some veggies for a tasty low-calorie main dish. Little pizzas made with prebaked crusts, tomato sauce, low-fat cheese, and veggies grill up brilliantly on a barbecue. You can make ground-turkey-and-three-bean chili in advance in a Crock-Pot® and warm it up on the grill. Just a little forethought and some lean meat choices can make a huge difference.

8. Just desserts. Most of the time, dessert at a tailgate party comes in the form of beer, with an occasional Oreo® thrown in. No one puts a lot of thought into making desserts for one of these events, and they put even less thought into how many cookies or brownies they’re shoving in their mouth. Instead of satisfying your sweet tooth with enough calories to fuel a defensive lineman, try replacing those high-calorie desserts with one of these ideas.

Grill pineapple slices or spears for 1 minute on each side, baste with dark rum, grill for 1 more minute, and serve warm with mint sprigs. Make low-fat banana bread by replacing the butter or oil in the traditional recipe with applesauce. Buy a premade angel food cake, slice, and serve with fresh strawberries and either light Cool Whip® or one-third whipped cream with two-thirds drained plain nonfat yogurt folded in. In advance, bake apples stuffed with dried fruit and honey in a pan of apple juice, then heat up later on the barbecue. Make a low-fat batch of oatmeal cookies with whole wheat flour and vegetable oil. There are lots of sweet options out there that can also be sweet to the size of your gut.

Football season is long, especially if you’re a Buffalo Bills fan. In those 17 weeks, you could do a considerable amount of damage . . . or you could have the body of your dreams. Since the NFL rules the airwaves for roughly 5 weeks longer than it takes to do P90X, it’s well worth it to put a little effort into your tailgating choices. And although your friends might give you a hard time, consider how their faces will look at the end of week 15, when you have a rock-hard six-pack, and they have more of a keg. Yeah, it’s worth it.

Boost Your Metabolism Throughout the Day!

7 Easy, “Good for You” Lunch Recipes