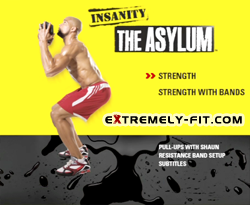 I’m back with another Insanity Asylum Review!  Today was actually an interesting workout, one that  I was actually looking forward to.  For those of you that have completed, tried or currently working out to Insanity, you know that there is not a weight workout included in the regular version.  Shaun T did release a Deluxe version which does include a upper body weight workout, but its an additional cost, and does not come included in the regular Insanity workout.   With Insanity Asylum, you get a great weight workout called Strength.

Insanity Asylum actually schedules Strength on a fairly regular basis, which works great for me! And I think you will like it too!

There were several things I liked about Strength: 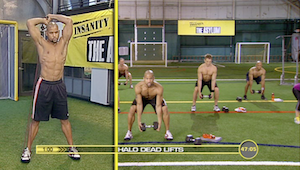 2.  It requires dumbbells or resistance bands.  Either one works fine.  AND… they have a special version of Strength that demonstrates the bands on each move.  So you can learn the proper technique very easily.  Simply select the “Strength with Bands” option on the DVD menu.  See the image at the top left.  In addition, both versions show examples of bands and weights.  Pretty cool!  I’ll also throw in a few screen shots of this for you.

3.  You can use a chin up bar or NOT.  So if you have one fine.  If you don’t, Shaun T very clearly shows you the variation.  To tell you the truth, the variations aren’t easy variations.  You still have to work!

4.  Strength is a tough workout, but it gives your legs a break from intense cardio.

5.  You use the same set of dumbbells throughout the entire workout.  That doesn’t mean you can’t switch out to lighter or heavier, it just means you don’t necessarily have to have multiple sets.  I would imagine at some time you will want to increase your weight or decrease, so the more the better.  The point I’m trying to make is that you are not constantly changing weights.

There were a few things I didn’t like about Strength:

1.  While it will only happen once, I would have liked some indication what the cast was using in terms of weight.  First time today, I just guessed at a weight range, and went for it.  At some point I realized I was too heavy.  It’s a one time problem but I wanted to mention it.

2.  The cool down and stretch was quick at the end. (Just over 1 minute). Of course we can always stretch past the end, but the DVD was only 47 minutes.  A few more minutes at the end would have been nice. Two fairly insignificant dislikes, and they are quickly over shadowed by the good points mentioned above.

Onward to the Review:

This will be quick, and somewhat to the point.  As mentioned above, the Strength workout was just over 47 minutes.

The workout starts with a refreshing change from the typical cardio warm up.  This warm up was actually using weights.  Nice change of pace, and it consists of 5 moves, repeated twice.  The warm up is somewhere around 11 or 12 minutes.  You get short water break, and then the stretch which was shorter than I would like, about 3 minutes.  Lots of weights to do I guess.  🙂 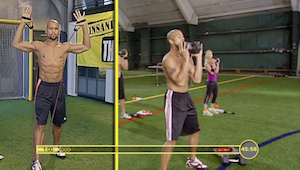 With about 32 minutes left on the timer you start the workout.  The first part of the workout has 3 sets.  You do a 1 set, which consists of 3 or 4 exercises, get a quick drink of water, then the 2nd set, water… third set.  The sets are progressive.  Which means they get harder as you proceed through the sets.  So what starts out as “not so bad” gets “this is tough” fairly quick.  The first round focuses primarily on biceps, shoulders, mixed with squats and some jumps.  You are performing multiple moves at the same time.  This will make more sense as you go through the workout.  This first round takes about 12-13 minutes.

The third round is again progressive and focuses on your chest, and also has some squats etc.  This round is about 7-8 minutes.

You finish the entire workout with an exercise called Frog Planks.  By this time you are completely exhausted. This lasts over a minute.  The cool down is amazingly quick.  Just over a minute. And you are now welcome to continue stretching, cool down, or lie on your back for a few minutes.  Not saying that’s what I did. 🙂

All in all, I really enjoyed this workout.  There were several occasions where my weight was too heavy, and I had to choose the smart path, and rest.  Next workout, I will likely drop my weight so I can go for time and reps, than maybe later graduate to my heavier weights.  Having said that.  Don’t sacrifice form.  Don’t try to lift weight that is so heavy that you lose form.  This does nothing but cause injury and heartache.  Be safe, work hard, and keep pushing play!  Join us on Facebook, and subscribe to our blog to catch all the new reviews as they come out.  If you’re doing Insanity Asylum, and have comments, we welcome them below! 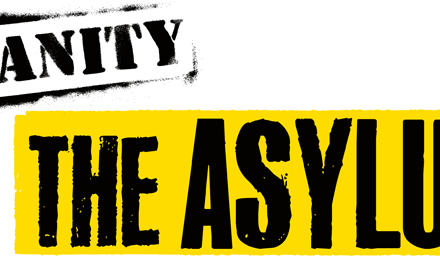 Insanity Asylum Review: Back to Core